Thank you for supporting Crowden! 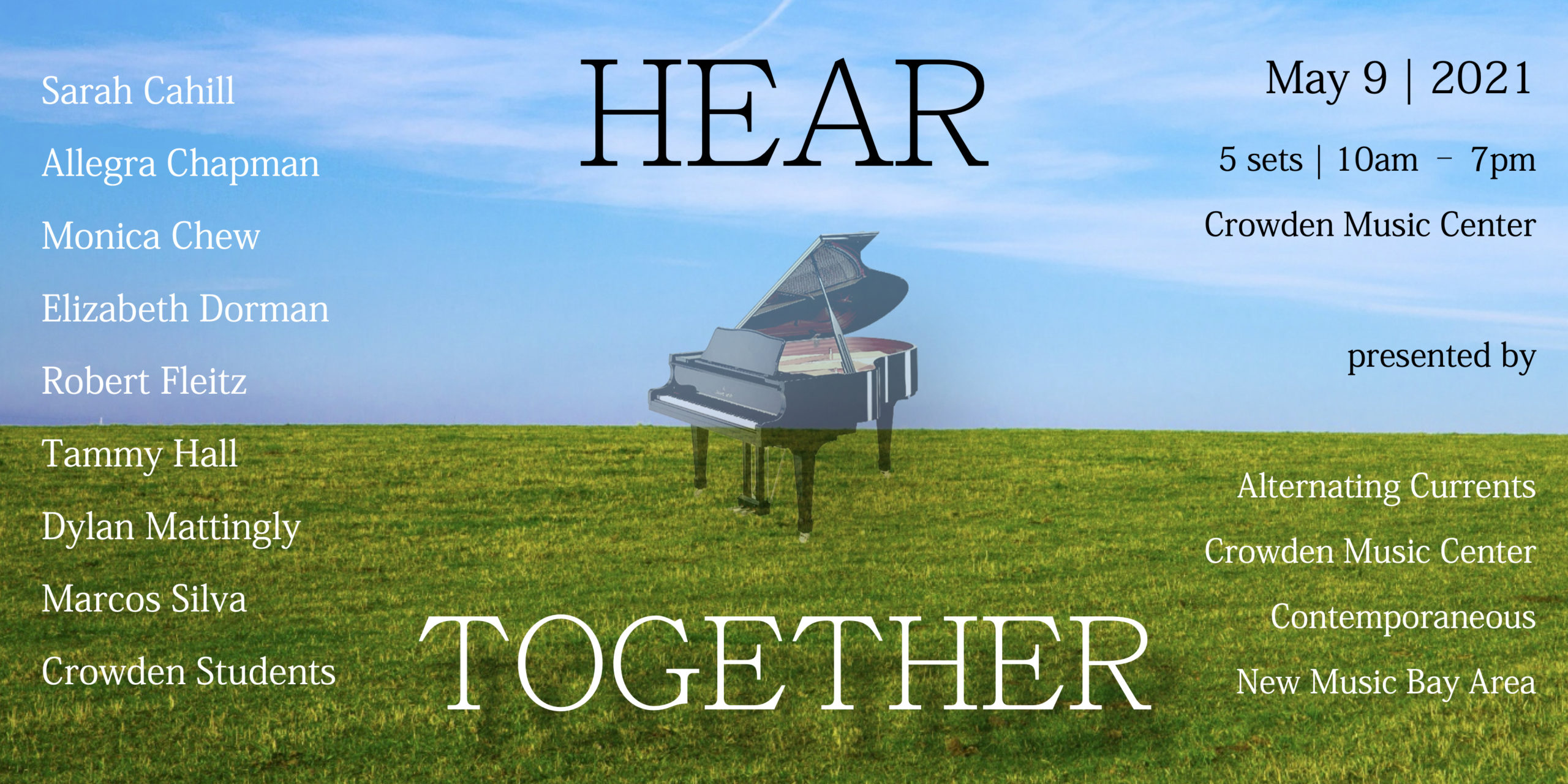 HEAR | TOGETHER was a celebration of the return of live music safely, in the open air, and the diverse range of pianists and composers in the Bay Area.

Our thanks to Alternating Currents, Contemporaneous, New Music Bay Area, and the Ross McKee Foundation for collaborating on this delightful Mother's Day of piano music!

Crowden's 2020 Gala was canceled due to the pandemic.

We were thrilled to welcome so many Crowden supporters at our last Winter Benefit concert, held on February 6, 2020.

Crowden members at the Patron ($500) level and higher receive complimentary tickets to the Winter Benefit, as well as to an exclusive reception prior to the concert. Become a Crowden Member here.

Nora Chastain, granddaughter of composer Roy Harris, was born in here Berkeley, where she began her violin lessons with Anne Crowden. Her studies continued at the Cincinnati Conservatory and at the Juilliard School with Dorothy DeLay, and in Europe with Alberto Lysy, Sandor Vegh, Ana Chumachenko, and Sir Yehudi Menuhin. At age sixteen she made her debut in Berlin playing Barber's Violin Concerto; since then she has been a regular guest with such orchestras as the San Francisco Symphony, the Orchestre de Paris, Cincinnati Philharmonia, the Jerusalem Symphony Orchestra, and the Bern Symphony Orchestra. She is a founding member of the Menuhin Festival Piano Quartet and Trio Kreisleriana.

Her chamber music activities have brought her to many of the world's capitals, including Frankfurt, Hamburg, Berlin, Bonn, Paris, Milano, Zürich, Geneva, Edinburgh, Washington D.C., New York, Boston, San Francisco, and Sydney. Ms. Chastain's recordings include sonatas of Mozart, Beethoven, Faure, Debussy, many works for piano trio and quartet, as well as Bartok's second violin concerto. She has been a prize winner at several competitions including the Menuhin Competition in Paris in 1985. In 1993, she was awarded the prestigious annual "Förderpreis der Europäischen Wirtschaft" in Zürich as soloist. An active teacher, Nora Chastain is Professor of Violin at the Universitaet der Kuenste Berlin and the Hochschule für Musik und Theater Zürich. Until 2004 she held a Professorship at the Musikhochschule Luebeck.

As one of Europe's most sought after teachers, Nora Chastain has amongst her students international prize winners, concertmasters of major European orchestras, members of well known chamber ensembles, and faculty members of universities of music. She gives regular master classes and serves on juries of international competitions. A main focus of her teaching is the integration of the American and European traditions of violin playing of the last 50 years.

Jeffrey LaDeur is known for his “delicate keyboard touch and rich expressivity” (San Francisco Chronicle) and playing described as “deeply moving, probing, felt entirely in the moment” (Eduard Laurel) Much sought after for his rare blend of insight, spontaneity, and approachable, communicative stage presence, Jeffrey has captured the hearts and minds of audiences from the Kennedy Center and Carnegie Hall to the Shanghai Conservatory and the Orlando Festival in the Netherlands.

Having inherited a rich tradition of pianism and interpretation from Annie Sherter, student of Vlado Perlemuter and Alfred Cortot, LaDeur has established himself as a compelling exponent of the French masters from Couperin to Ravel in addition to a diverse repertoire of canonical and alternative masterpieces. In March of 2018, LaDeur made his solo recital debut at Carnegie Hall on the centennial of Claude Debussy’s death, performing the composer’s complete Etudes with works by Couperin and Chopin. His acclaimed solo album, The Unbroken Line [MSR Classics) is devoted to music of Rameau and Debussy and has been hailed as “a masterpiece of understatement, simplicity, and ‘old school’ chord-playing where every note sings out with meaning” (Gramophone). In 2017, LaDeur founded the San Francisco International Piano Festival for which he serves as artistic director.

As a pianist, LaDeur integrates solo performance and collaboration, blending the intimacy of chamber music with the brio of concertante works. As founding member and pianist of the Delphi Trio, Jeffrey toured internationally with the ensemble for a decade and premiered William Bolcom’s first Piano Trio, written for the ensemble. With mezzo soprano Kindra Scharich he recently recorded To My Distant Beloved, an album exploring the relationship between Beethoven’s An die ferne Geliebte, Schumann’s Frauenliebe und -Leben and his epic Fantasyin C for solo piano, to be released on MSR Classics spring of 2020. Jeffrey has collaborated with distinguished artists such as Robert Mann, Bonnie Hampton, Ian Swensen, Axel Strauss, Geoff Nuttall, Anne Akiko Meyers, David Requiro, and Scott Pingel.

Dedicated to the principle that solo pianists thrive together, rather than as competitors, Jeffrey founded New Piano Collective, an artistic alliance of pianists, dedicated to uniquely personal artistry, collaboration, and ground-breaking programming. In 2017, LaDeur expanded the Collective and founded the San Francisco International Piano Festival, now in its fourth season, for which he serves as artistic director. The festival has quickly become of the most exciting and engaging music festivals in the country.